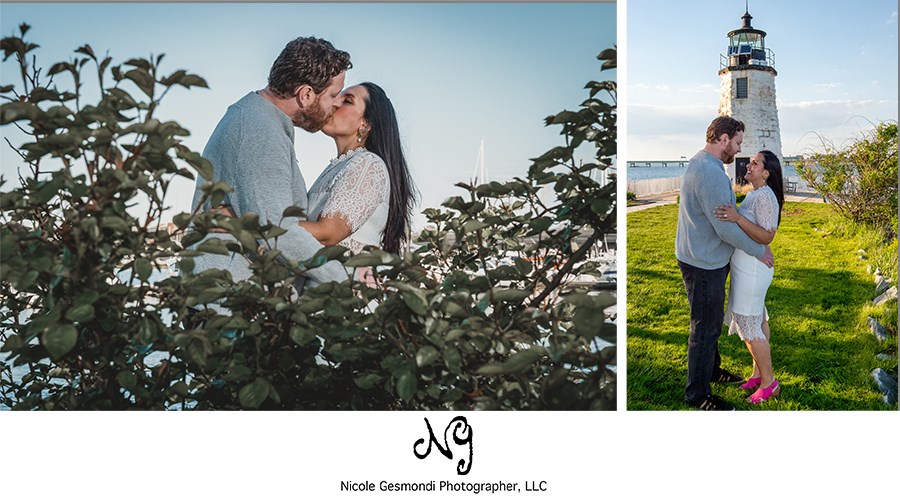 On a personal level, we could not be happier for Karenna and Andrew – Karenna has been my best friend since 7th grade! We go waaaay back; I will spare you the details on how many years that is, but it is quite a few! They were introduced by a mutual friend and from the get-go it was obvious they were so happy together. We swear you can actually see them glowing in these engagement photos. 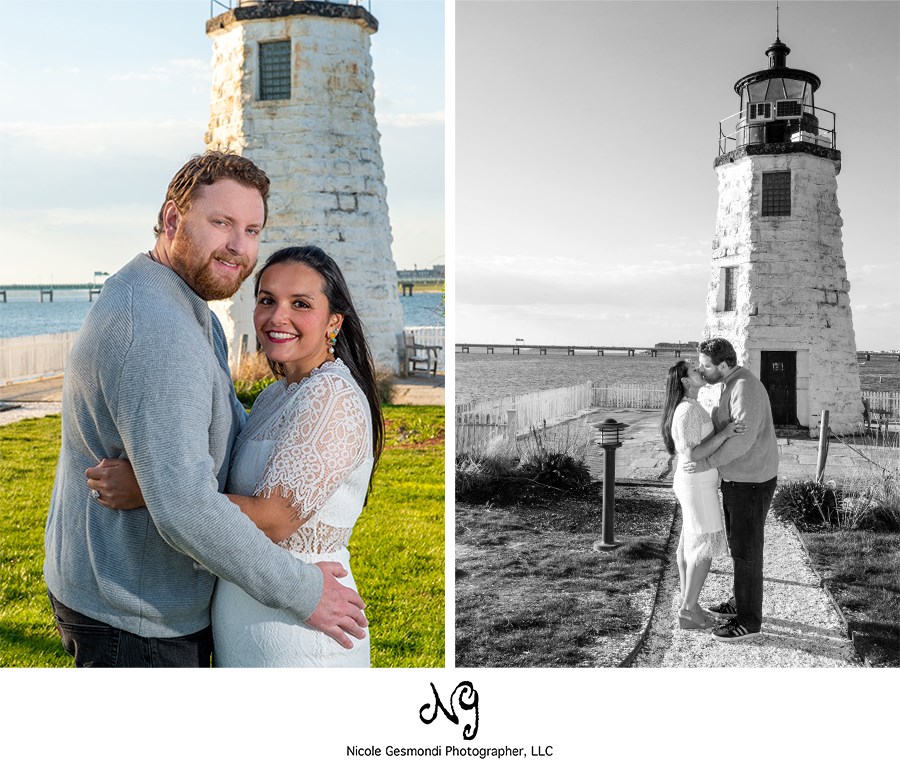 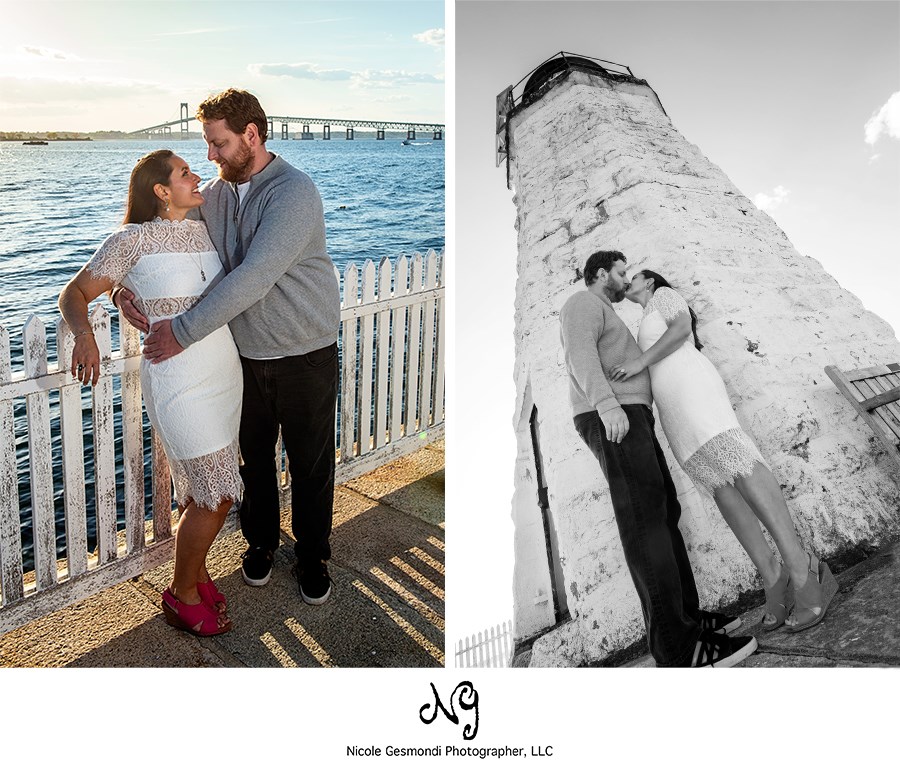 Karenna and Andrew chose Newport because (aside from its gorgeousness) they spend a few weeks a year in there and it is a sentimental location for them. If you follow our work, you know we also love Newport for engagement shoots, and are familiar with several locations offering up some of the best views in Rhode Island. 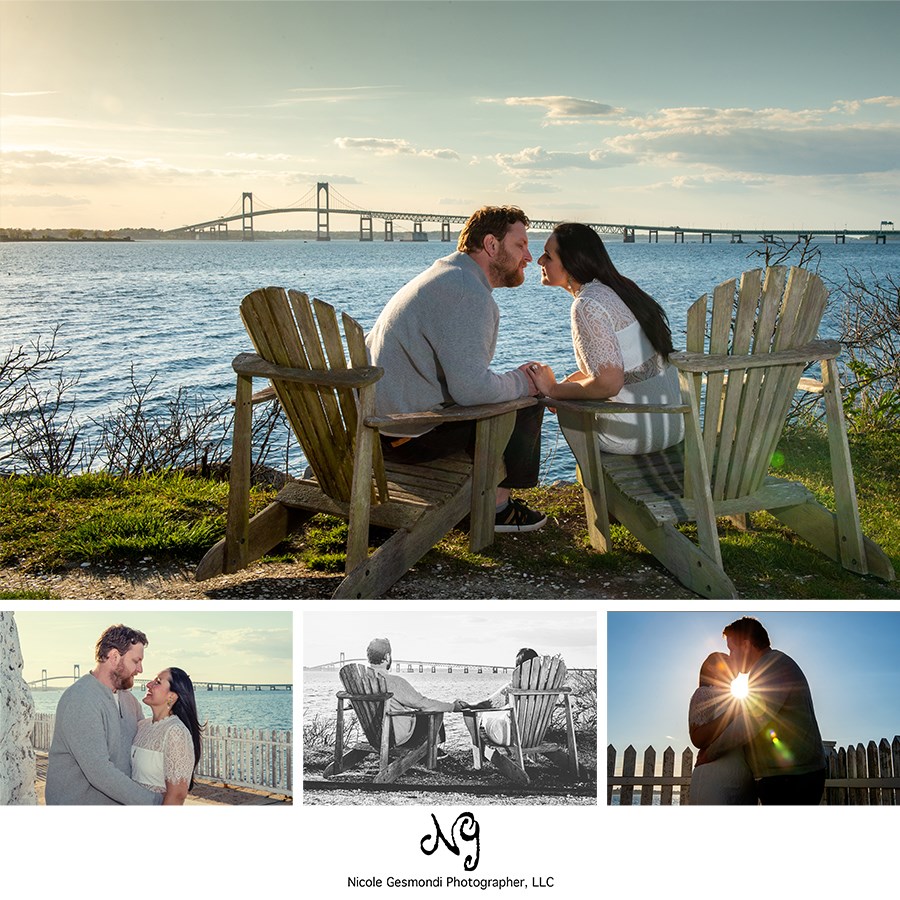 We started at Gurney’s Resort for photos with the bridge in the background (a Newport engagement shoot must-have), and the sunlight was perfect. Those golden rays filtering over the bay gave Karenna and Andrew plenty of photo-ops. Are the images of them on the Adirondack chairs not stunning!? No wonder we recommend Gurney’s to our couples! 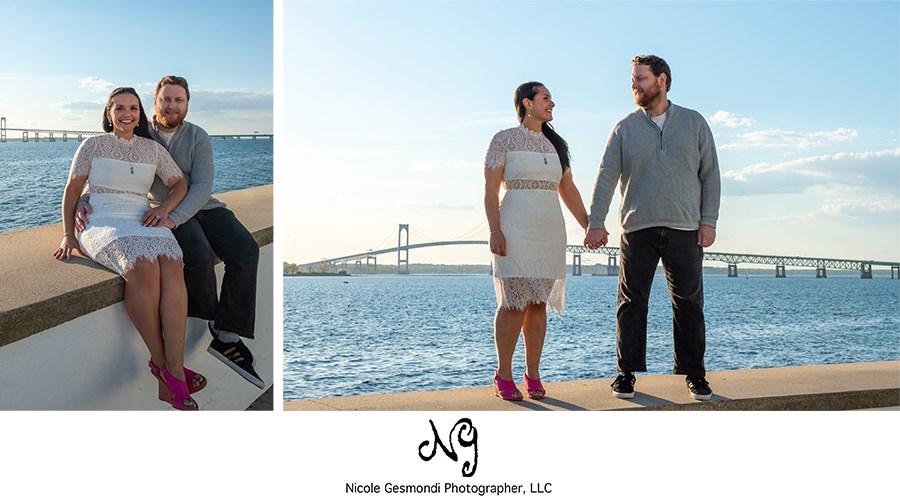 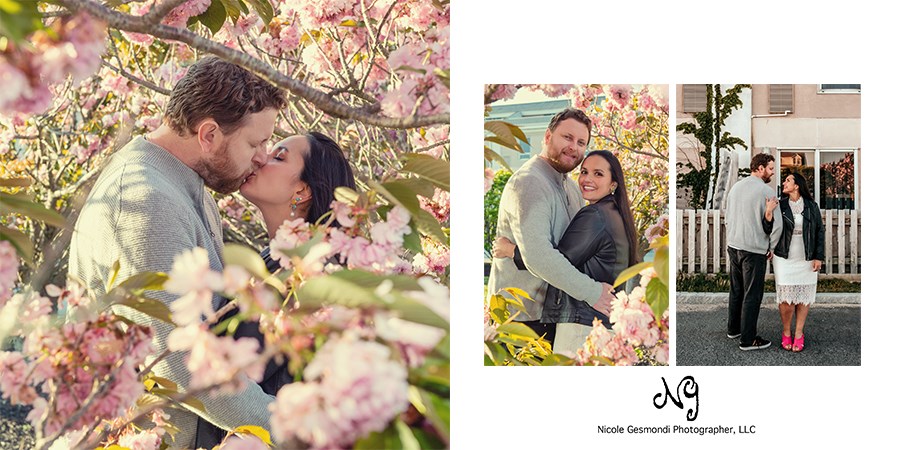 Afterwards, we switched up the location and went to Brenton Point for engagement photos with the graffiti and abandoned buildings. Again, if you follow our work, you know we also love these things! Karenna also had the idea to try smoke bombs (do not worry, we practiced at home first, and brought an extinguisher), which we thought was another cool way for them to personalize their shoot. 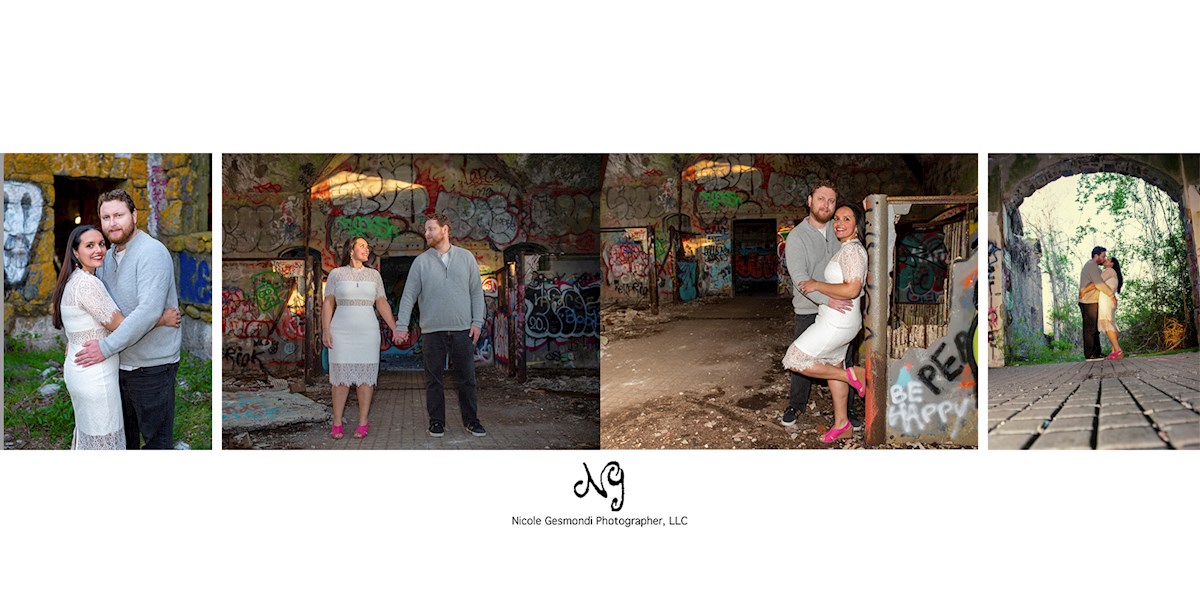 As a bonus, Karenna and Andrew were treated to the most amazing sunset of yellows, peaches, and blues (thanks again, Newport!), there was even a picturesque sailboat in the distance! It was a magical end to a magical afternoon with some of our favorite people. We are so excited to see them say “I do” on the Cape at the end of September! 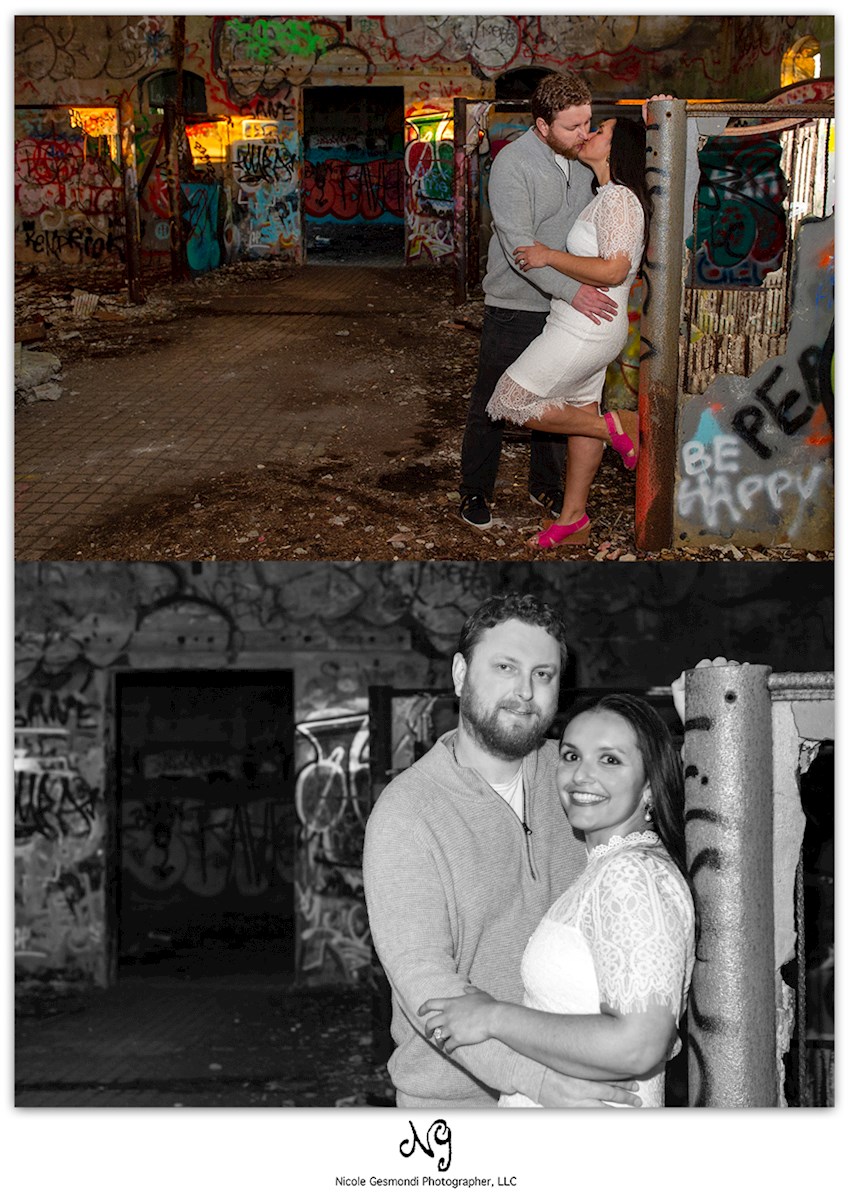 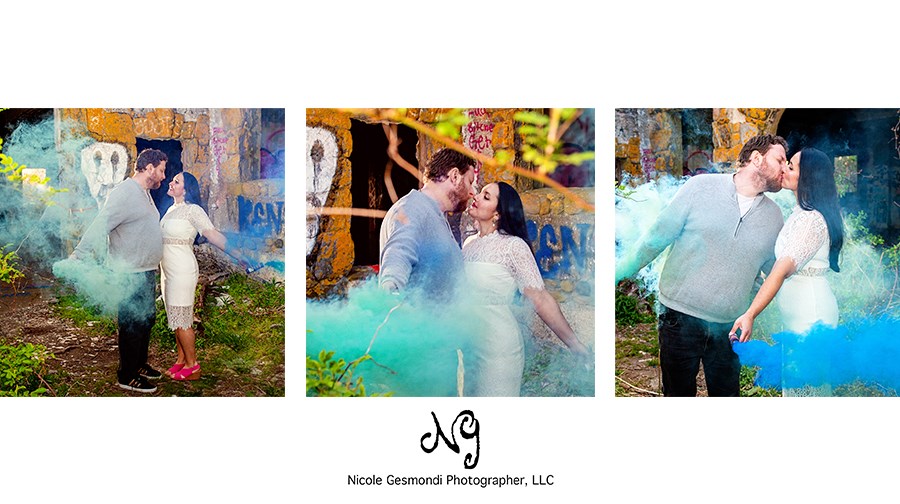 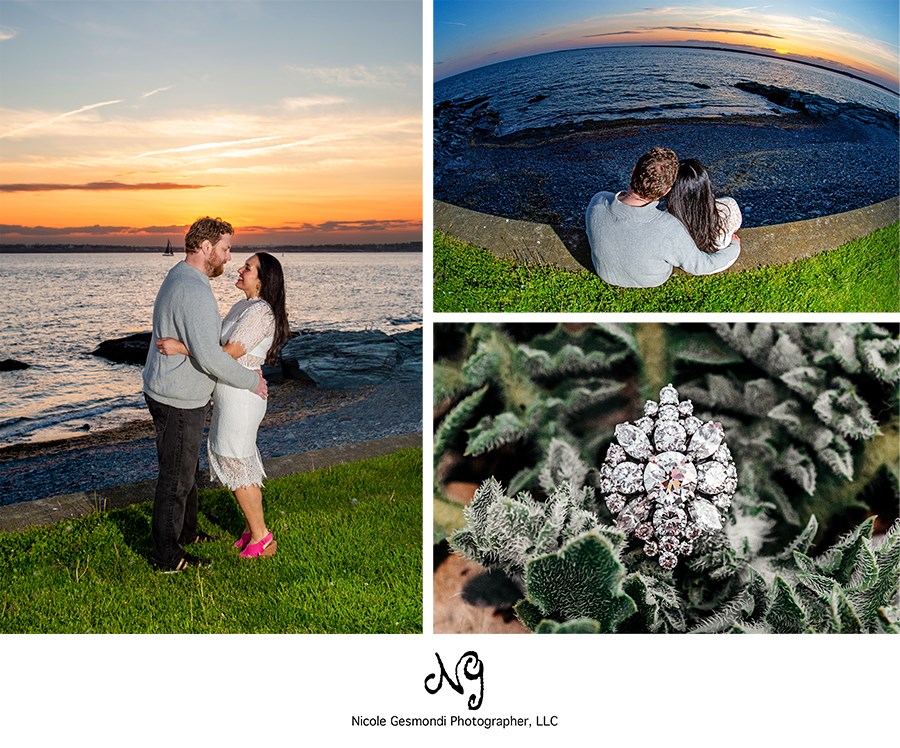 Are you interested in booking an engagement session with Nicole Gesmondi Photographer, LLC? If so, contact us on our website, we'd love to hear from you!